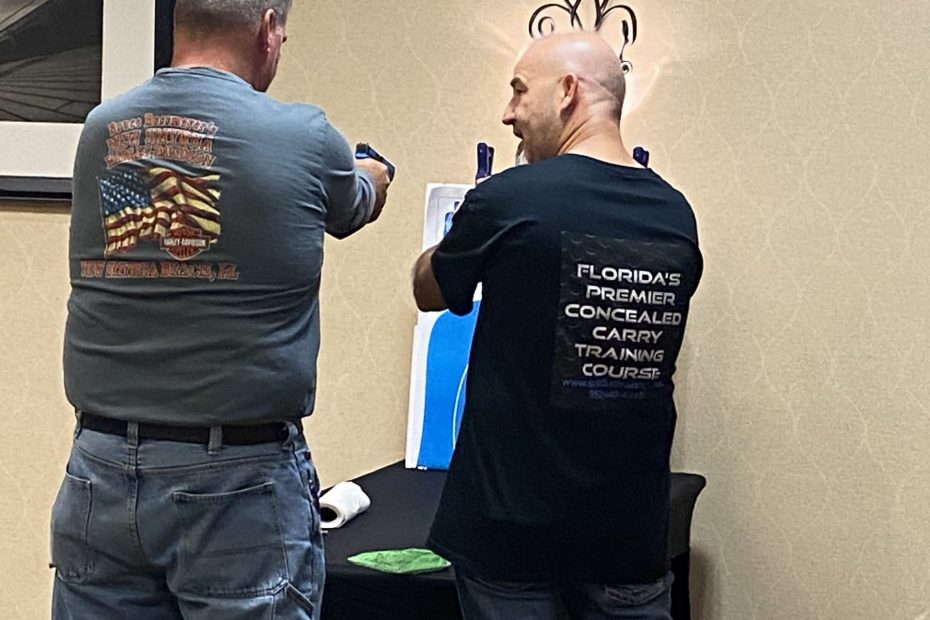 The SHOCKING truth about Tasers and Stun Guns

Let’s talk about shock tools for a few minutes. These tools are designed to cause intense pain, muscle spasms, and potential temporary paralysis. They work by essentially short-circuiting the electrical impulses that are constantly happening inside the human body as part of how our central nervous system naturally works. The shock produced by these tools causes our body’s natural electrical impulses to go haywire, often resulting in the temporary loss of our basic motor functions. When employing these tools against an attacker, key target areas are where there is high muscle density or direct access to nerve bundles. In an attack scenario, the easiest and most effective targets are typically the upper chest area around the pectoral muscles and the side of the neck. Although tasers and stun guns are often marketed in the same self-defense category and many people use the terms synonymously, there are a few fundamental differences worth pointing out.

The Basic Differences in Tasers and Stun Guns on the Market

Some of the biggest differentiating factors are price, range, and mode of operation. Tasers are often far more expensive, sometimes costing several hundred dollars, whereas a traditional stun gun can usually be purchased for well under $50. Tasers are often pistol-like devices that require a bit more training and practice to be deployed effectively whereas a stun gun is a little more “point and click”. Tasers tend to provide a longer stand-off range (up to 15 feet in some cases but more often, around 7-10 feet is the optimum deployment range) whereas a stun gun needs to be “danger close” due to the need to make direct contact with the person it is being used against.

Another big difference is that tasers deploy electrodes which are often a one-shot solution. Once deployed, you then have to get another electrode pack and “re-load” your taser. Contrast that with a stun gun that will shock “on demand” many times without needing to be re-loaded or re-charged. Lastly, tasers tend to be a little larger and more obvious whereas a stun gun can come in a variety of shapes, sizes, designs, etc. For example, stun guns can come in the form of pens, keychains, flashlights, batons, etc. Aside from these primary differences, I’m going to use the term “stun gun” loosely throughout this write-up to describe all of the shock-based defensive options out there these days.

How Do Stun Guns and Tasers Work? Which are More Effective?

Now, let’s talk about one of the more important features of either product: its effectiveness! The “power” of a stun gun is often expressed in the voltage. Basic stun guns might be as low as 25,000-30,000 volts whereas a super “high strength” model might produce up to 200,000,000 volts! Now, you might automatically say, “well obviously I want more volts”. However, even though voltage is how stun gun products are often marketed; there is a lot of hype surrounding those multi-million-volt options. You don’t need to pay for the hype! It’s the amperage that determines how much punch the product delivers to the attacker. To use a simple analogy, let’s imagine for a moment that electricity is a river. The voltage would be the overall size of the river. The amperage would be how fast that river is flowing. If you know anything about a river, you know fast water is far more dangerous than still water, regardless of the size or depth of the water itself.

That same basic paradigm holds for electricity as well. While higher voltage is certainly not a bad thing, more amperage is what makes a big difference. A fraction of an amp can kill you! Most stun gun products range between 2 and 4 MILLIAMPS (for my less nerdy crowd, 1 amp is 1,000 milliamps). So, to put all this science mumbo jumbo into layman’s terms; the higher the voltage, the more stimulus to the nervous system but the higher the amperage, the more potent the dose of stimulation. As a general rule, look for a product that has at least 50,000 volts. Why 50,000 volts as a baseline? Well, most police-grade tasers are about 50,000 volts. That certainly seems like a great baseline to work from. Could a quality 25,000-stun gun be just as effective if properly employed? Most likely yes. However, when you’re buying a potentially life-saving tool, “most likely” and “probably so” aren’t the benchmarks you want to strive for.

Now, if you want to geek out on the nerdy details; the TRUE measure of a stun gun’s effectiveness is the amount of Microcoulombs (the measure of the shock charge itself) it delivers. A 2011 National Institute of Justice report showed that “subjects reported pain on average at 0.5 micro coulombs, and intolerable pain at 1.0 micro coulombs (μC).” In other words, look for a high-quality stun gun product that will produce at least 1.0 micro coulombs. There are many great products out there by very well-known and respected companies like Sabre, Mace, Taser, ViperTek, etc that produce well over 1.0 micro coulombs.

Speaking of voltage that does matter, let’s talk about the device’s battery for a minute. Many of the more basic stun guns use a simple 9-volt battery. These can lose their charge over time and the last thing you want is for your 50,000-volt (or 5,000,000-volt) stun gun to fizzle out right when you need it the most because that 9-volt battery has died. For this reason, many of the newer models are coming with a rechargeable battery where a 6-8 hour charge will keep the device running strong for several days (or even weeks in some cases). Just something to consider as you are shopping for potential options.

What to Know About Taser and Stun Gun Design

One last note on “effectiveness”: the design of the device is important to consider as well. A stun device with relative “flat” or “dull” electrodes may prove less effective when trying to shock through clothing. As we move into fall and winter, for example, think about the electrical absorption provided by multi-layers of clothing, heavy coats, etc. Getting direct or at least near direct (one layer of clothes, etc) access to the skin will make the shock more intense and effective. If your device’s electrodes are sharp and pointed, it will be a little easier to “punch through” those clothing layers and deliver a more direct charge to the attacker’s body. Last comment on this…when it doubt, hit them in the side of the neck!

Another important note is that, unlike pepper spray which is legal in all 50 states, some states do prohibit the sale and use of “shock weapons”. While most states allow them, you need to do your research on your specific state laws before deciding which self-defense tools are best for you. For our Florida crowd, they are legal to own and you do not need a permit for them. While absolutely no substitute for doing your research and understanding your specific state laws and local ordinances, here are a couple of decent starting points for your investigation:

Last but certainly not least, just like any self-defense tool, you need to practice carrying, accessing, and deploying this tool. You’ll already know what to do in the heat of the moment. When attacked, you won’t have time to think through the situation and devise a plan. Have a well-thought-out and well-practiced plan already in place so you can simply react effectively and win the fight. Stay safe out there!

Questions & Contact
About
Our Classes
Search For A Class
Resources