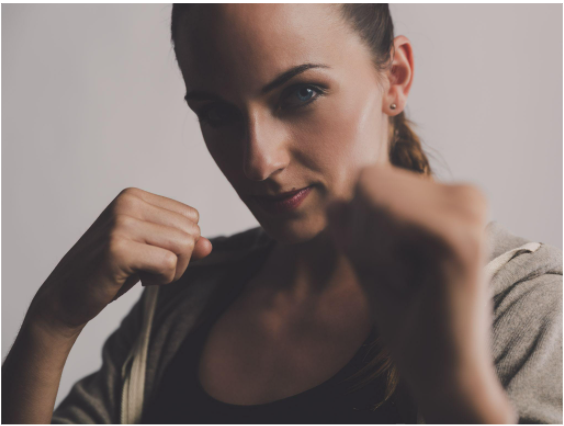 Getting Handsy: How to Use Your Hands in Combat and for Self Defense

Let’s talk about hands for a moment. (No, sorry, I don’t mean jazz hands.) I mean fighting hands! Here’s the cool thing about your hands. They can be PERCEIVED by others as defensive (an important phrase if witnesses are questioned by police) while at the same time being completely prepared for violence if needed. Here are a few tips from the Split 2nd team to help you properly use your hand in self-defense or combat.

If I told you to imagine what the international sign for “Stop” or “Don’t” looked like, you’d probably picture someone with their hands out in front of them, palms facing away, in an almost universally recognized “stop” pattern.

I’ve traveled to more countries than I can count without pausing to think about them all and add them up. Multiple continents. Multiple cultures. Everywhere I’ve ever been, hands up, palms facing away, appears to be a sign for someone to stop. It’s also very defensive and completely non-aggressive to the untrained eye. But if your potential attacker isn’t looking to stop instigating a fight even after using your hands, this position has another benefit.

Despite the very non-confrontational and “please stop right there” appearance of the above-hand position, it’s also an excellent preparatory position if you need to fight. It takes a mere fraction of a second to turn this peaceful, defensive, non-aggressive appearance into “I’m about to rock your world!” decisive action. It’s also why some of the best personal defense training utilizes a similar hand position in the basic fighting stance. You’re 100% prepared to defend yourself and counter-attack within a split second but also appear 100% “non-confrontation” to any outside observer.

When you take this position, both in terms of your hands as well as your body position (notice the full fighting stance in the center pic), and you pair it with forceful verbal de-escalation, you portray a formidable yet “non-aggressive” persona.

By forceful verbal de-escalation, I mean exactly what it sounds like. By LOUDLY and forcefully sayings, “STOP RIGHT THERE!”, “GET BACK!”, “LEAVE ME ALONE!”, or other non-aggressive verbal commands, you not only put your potential attacker on notice that you’re well aware of their presence and intentions, but you’re also bringing immediate attention to the situation. Anyone within earshot (again, be LOUD), will immediately turn to see what is going on and they will see you, with your hands up, asking the aggressor to stop.

Notice we did not scream obscenities, threats, or antagonizing remarks. While it may be tempting to scream, “I’ll F-ing KILL YOU!”, “I’ll Kick Your @$$!”, or other words that we think might be intimidating, those can work against you, both in terms of the public appearance of your innocence as well as the incitement by a confrontational attacker to get more aggressive with you. Deescalation is key, even if you feel like an attack is inevitable. The goal here is to be 100% ready to lay waste to the attacker while also portraying 100% innocence in the eyes of any witnesses. Remember, if you have to defend yourself, there will most likely be a police report, a potential court hearing, and in the worst-case scenario, a jury trial. How you act in the moments before your defense could very well come back around at a later time. Be mindful of that.

The beautiful thing about this hand position, other than what I’ve already discussed, is that it leaves your options open to flex and react as the situation unfolds. Maybe your hands-up posture, paired with proper verbal de-escalation, is all that you needed and it defused the entire situation. Great! Nothing wrong with that at all. However, maybe the attacker moves closer and you now need to defend yourself, launch a counterattack, deflect something thrown at you, or take any number of actions that the situation might dictate. Having your hands up gives you the reaction time that allows more options to be on the table. More time and more options are always precious commodities in a fight.

Two hands up and ready is often the best initial reaction to a perceived threat. However, if you carry a weapon and you believe you’ll need to employ it, keeping one hand up after the initial de-escalation attempt while moving the other hand towards the weapon side of your body may be the best tactical decision in that scenario. If you carry a flashlight, metal pen, stun gun, firearm, etc, having your “strong hand” as close to that tool as possible is not a bad move at all. If the “tool” you’re employing is not illegal to brandish, putting that tool in your hand before an attack is perfectly legal and provides an even greater tactical advantage if you need to employ it. Regardless of how you decide to access your self-defense tool, at least one hand should always be up, ready to protect yourself.

Stay safe out there!

Questions & Contact
About
Our Classes
Search For A Class
Resources